The campaign is building momentum with nearly 3000 supporters having signed the petition. The Totnes Times recently ran a front cover on the cycle path, highlighting the danger of Devon Country Council signing off a longer route that would bypass Totnes. 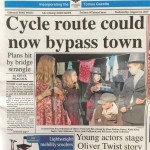 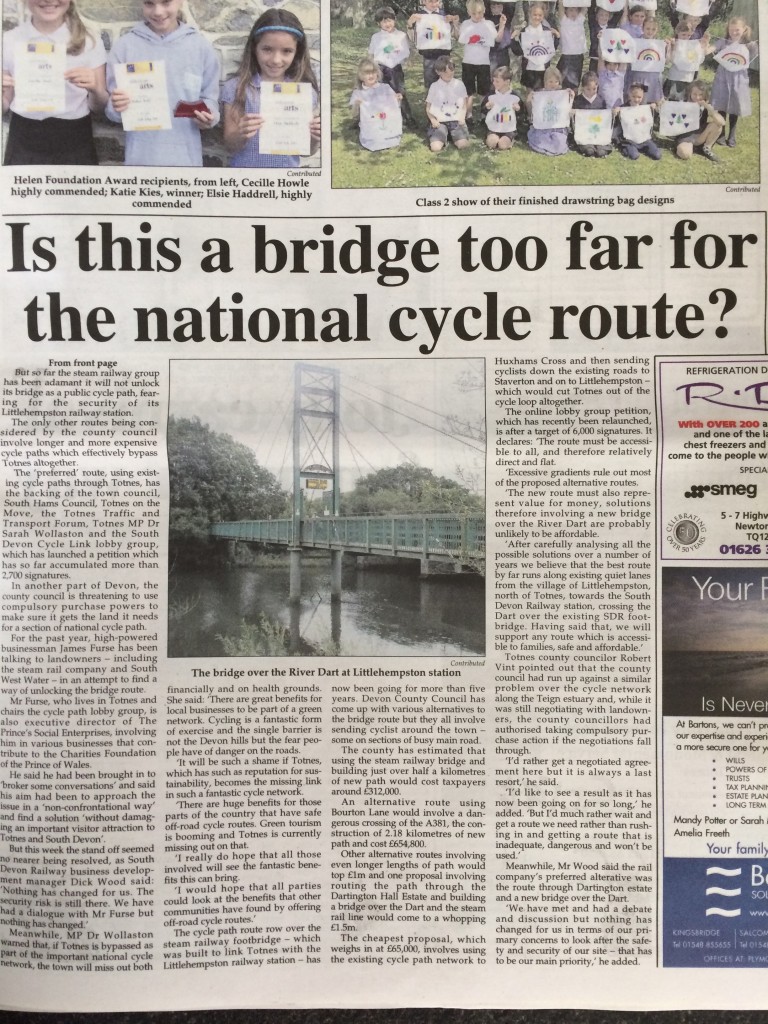 DCC’s more detailed route study was commenced in May 2012 but has not yet been concluded.  We understand that this study is not being given a high priority because DCC consider that there is little prospect of any funding being available in the next several years to develop the path.  We realise of course that funding is very tight but we still question whether DCC have their priorities right – and we remain very concerned about the prospect of a fatality on the A381.  Note the recent serious accident reported in the Totnes Times on 14th Dec 2012, which really must act as a wake-up call.  Bringing our preferred route over the footbridge into operation would cost approx £300k according to DCC.  Isn’t this a price worth paying to save a life?

We will post fuller status update early in the New Year.

We met with the Head of Highway Management from Devon County Council along with a number of councillors on 5th April to discuss progress towards establishing a safe and accessible route.  DCC had provided us with a feasibility study of 5 possible route options in advance of the meeting, which you can read by clicking the following link:

The only serious options arising from this feasibility study appeared to be either our proposed route requiring the permission of South Devon Railway to share their footbridge (option 3), or a route crossing the River Dart over a hypothetical new bridge and running through the Dartington estate (options 4).  Option 4 and would make a delightful route, but would cost much more than option 3 (an extra £1m approx).  Our big concern about any decision to select option 4 would be that the high price would cause the project to be deferred indefinitely.

DCC went on to meet with the management of South Devon Railway, Totnes Rare Breeds Farm and South West Water the following week.  We understand from DCC that the meeting was constructive, and we are grateful to these organisations for devoting time to this project.  DCC relayed our suggestions on mitigating security concerns – but we understand that SDR and Rare Breeds management remain extremely worried about the security of their premises.

Although this is disappointing, the good news is that DCC have decided to allocate to one of their design engineers the task of conducting a more detailed and thorough appraisal of each route.  This will involve discussions with land owners and local councils, and will include examination of how to mitigate site security risks – fingers crossed that this professional engineering input will deliver new solutions that will be acceptable to SDR.

Thanks to your support so far, Devon County Council now have this project firmly on their agenda.

A meeting was held at Devon County Council offices on October 17th 2011 between representatives of the local villages, the county councillors that represent them and the head of Highway Management at DCC who is responsible for the implementation of cycle routes throughout Devon.

The following presentation was made to DCC outlining the pros and cons of the various routes into Totnes from the villages in the hinterland to the north east round to the north west of Totnes.

Once a route has been selected and agreement has been obtained from all landowners, a design will be drawn up along with an estimate for construction.

Construction will then be dependent upon the identification of suitable funding.

In March 2011 Devon County Council held a series of sustainable development workshops in Totnes entitled “Totnes on the Move”. These were designed to establish what local transport requirements were for people living in and around Totnes. Cycle paths featured predominantly – particularly this one.

There were 22 specific references alone to the Littlehemspton Cycle Path in this report. To see a copy of the report – click here

Since then Totnes has been allocated, by Devon County Council, at least £1 million from a central government Sustainable Transport Fund. There is a press cutting on this funding on the Press Cuttings page of this website

Totnes on the Move is working in partnership with DCC on cycling infrastructure and enhancements in and around Totnes. The Littlehempston Cycle Path is included within the Cycling Project Proposal.

Our MP and County Councillors are continuing to work with Devon County Council, various cycling and transport government related bodies to make this project a reality.

Please spare a moment to sign our cycle path e-petition!

Please read our aims below and sign up on the right if you agree.

We believe there should be a safe cycle route between Totnes and Newton Abbot, enabling cyclists and walkers to avoid the dangerous A381 Newton Abbot road. This route should also complete the missing link in the National Cycle Network (known as NCN2).

The route must be accessible to all, and therefore relatively direct and flat. Excessive gradients rule out most of the proposed alternative routes. The new route must also represent value for money, solutions therefore involving a new bridge over the river Dart are unlikely to be affordable.

After carefully analysing all the possible solutions over a number of years we believe that the best route by far runs along existing quiet lanes from the village of Littlehempston (north of Totnes) towards the South Devon Railway (SDR) station, crossing the Dart over the existing SDR footbridge. Having said that we will support any route which is accessible to families, safe, and affordable.

We understand that the SDR management have concerns about allowing shared access across the footbridge. We believe that it is vital that any solution resulting in the use of the SDR footbridge must involve adequate council-funded measures to ensure the security of SDR and the Totnes Rare Breeds Farm, both of which excellent businesses we support and wish to prosper. Security measures would also need to be implemented sensitively to avoid compromising the aesthetic appearance of the station or the farm.

The missing link in the cycle network needs fixing. However we urge Devon County Council (DCC) NOT to sign off a route that bypasses Totnes and is hardly used currently. Instead we ask DCC to work with SDR and Rare Breeds Farm to find a mutually acceptable way forwards. And we ask that SDR enter these negotiations in the spirit of compromise, particularly in recognition of the fact that approximately 50% of the funding for their bridge was provided by the public. Please SDR, support the local community and help make this fantastic project a reality.