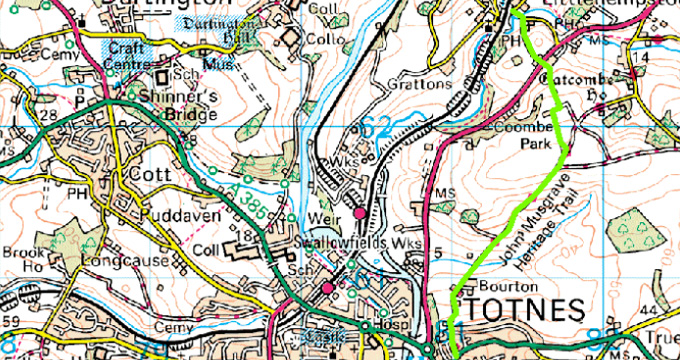 Description
The route starts on the A385 which is the main route between Totnes and
Torbay before turning onto Bourton Lane which starts as a well surfaced
housing estate road, becomes a country lane then deteriorates into a rough
track with potholes, streams cut by water erosion, concrete patched areas and
rough bedrock. In some places the track surface is the underlying bedrock. At
present a 4wd, quad bike, mountain bike or light walking boots are required to
negotiate the route. Gradients are long and steep with little respite from climbing. Width south of the crest are 3m plus some verge space for passing North of the crest width is
2.5m tight between hedges with passing only possible in gateways. The route crosses the busy A381 where the speed limit is 60mph and visibility is severely substandard when looking right when travelling northwards.

Works required.
A new path would require construction from Lower Bourton to Combe Cottage. To the south of the highest point considerable existing erosion indicates that drainage is a problem and a sealed path would be required for longevity. The path would be shared with agricultural traffic and will therefore need to be constructed at an appropriate standard for this. A visibility splay or traffic signals would be required to make a safe crossing of the A381. Signals may be ruled out as incompatible with the low number of crossing movements which could be expected. An alternative would be to relocate the crossing location to the south at the first point of acceptable visibility. This would require lengths of new connecting path on both sides of the A381.

Land
The route is essentially public highway and no land acquisition would be
required if implementing a traffic light crossing of the A381. If the alternative
safety measure of constructing a visibility splay at Hemsbrook Farm was taken land would be required and it is possible that a farm outbuilding would be affected. Agricultural land would be required to relocate the crossing point. Environmental Effects Minimal due to the extensive use of existing track.

Directness
In terms of “crow’s flight”, directness is reasonable however the route connects to the residential Bridgetown area which is across the river from schools, colleges, hospital, railway, and town centre. Not linked to existing cycleway network.

Attractiveness
The majority of the route would have low levels of motor traffic, has pleasant views and a rural environment. The gradients and quantity of climbing make the route quite unattractive and whilst cyclists benefit from freewheeling downhill the constant braking required on long sections is not pleasant. For pedestrians the steepness is such as to make walking arduous and falls outside the gradients that the disabled would be able to cope with. There is a little on–road parking for potential path users.

Safety
The gradients, narrowness of some sections and sharing with motorised, (mainly farm), traffic restricts safe use to more competent cyclists. Safety of the overall route is conditional on providing a safe crossing of the A381. Unintended Consequences. At present this option follows part of the existing John Musgrave Heritage Trail. “Overimprovement” would reduce the attactiveness of this rural trail to hikers and mountain bikers, the latter especially enjoying a moderately challenging ride on the existing rough and ready surface.
Improvement would increase the speed of motorised traffic which currentlyhas to crawl over bumps and potholes. Improvement of the junction at the A381 crossing would open up the lane to through traffic to Bridgetown.

Route Comparison
Route 1. Will generate little leisure use above that at present. Some present
users may be deterred by its improvement and potential speed increase of
local farm traffic. The poor condition of the existing track would require the
construction of a sealed road over most of its length. This option doesn’t offer
much to the long distance path user who would likely prefer riding along the
A381 to avoid the hill or might choose the existing Dartington path.
Although the route will form part of a longer strategic route its construction is
unlikely to be good value for money due to its lack of attractiveness as a route
for short locals journeys. The demographic of Littlehempston is such that only
a small minority (of an already small number of local residents) are likely to
use the route and it has little to attract leisure walkers or cyclists who would be
put off by the steep hills.

Please spare a moment to sign our cycle path e-petition!

Please read our aims below and sign up on the right if you agree.

We believe there should be a safe cycle route between Totnes and Newton Abbot, enabling cyclists and walkers to avoid the dangerous A381 Newton Abbot road. This route should also complete the missing link in the National Cycle Network (known as NCN2).

The route must be accessible to all, and therefore relatively direct and flat. Excessive gradients rule out most of the proposed alternative routes. The new route must also represent value for money, solutions therefore involving a new bridge over the river Dart are unlikely to be affordable.

After carefully analysing all the possible solutions over a number of years we believe that the best route by far runs along existing quiet lanes from the village of Littlehempston (north of Totnes) towards the South Devon Railway (SDR) station, crossing the Dart over the existing SDR footbridge. Having said that we will support any route which is accessible to families, safe, and affordable.

We understand that the SDR management have concerns about allowing shared access across the footbridge. We believe that it is vital that any solution resulting in the use of the SDR footbridge must involve adequate council-funded measures to ensure the security of SDR and the Totnes Rare Breeds Farm, both of which excellent businesses we support and wish to prosper. Security measures would also need to be implemented sensitively to avoid compromising the aesthetic appearance of the station or the farm.

The missing link in the cycle network needs fixing. However we urge Devon County Council (DCC) NOT to sign off a route that bypasses Totnes and is hardly used currently. Instead we ask DCC to work with SDR and Rare Breeds Farm to find a mutually acceptable way forwards. And we ask that SDR enter these negotiations in the spirit of compromise, particularly in recognition of the fact that approximately 50% of the funding for their bridge was provided by the public. Please SDR, support the local community and help make this fantastic project a reality.